A PDF introduction is available here. 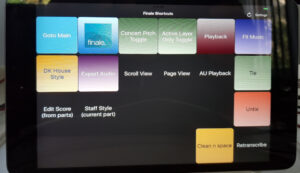 JetStream for Finale is a sophisticated set of shortcuts for adding markings to a Finale score, initially for control by Elgato’s StreamDeck.

But what about using other (often lower cost) interfaces such as Touch Portal (TP) to control Finale? Would it even be possible to use a web page?

FinaleControl is an agent for MacOS that uses the accessibility interface to drive Finale, and is intended to execute the JetStream 4-digit code or execute an item from the menu bar. It can register itself as a Touch Portal plugin, and also act as a web application server which will respond to a small number of requests.

FinaleControl does not completely replace sophisticated tools like Keyboard Maestro, but implements a reasonable subset of what’s useful.

The FinaleControl app runs on the same device as Finale.

This pilot version of FinaleControl can install itself as a plugin for Touch Portal and can respond to HTTP requests on a non-standard port (8765 by default). Either way, a 4-digit JetStream code is passed as a parameter and this is entered into the Finale/Lua dialog box, or a Finale menu item is executed.

At present, FinaleControl is a building block for an automation interface and doesn’t come with a complete set of control pages. Examples will be available.