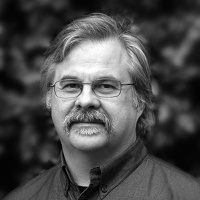 David Keeffe is an English-born Australian composer, conductor, horn player and technologist. Growing up in a musical family, at 6 he met Benjamin Britten, and the idea of actually becoming a composer was planted. His music literally draws breath: writing for voice and for wind instruments has been a constant theme. David’s music is often inspired by textual narrative, whether for actual word-setting or for purely instrumental sounds, and uses musical allusion and reference just as spoken and written language is enriched by metaphor.

Since 1997 he has called Melbourne home: moving to such a hospitable environment meant that David was revitalised in his musical interests, and the rest is history.

David attended Dulwich College, an English Public School founded by Edward Alleyn, one of Shakespeare’s leading men, and well-known for its music and drama, and then went to Trinity College of Music where he studied composition with John Tavener and horn with John Burden.

Continued study at the University of York led to an interest in computers and their musical applications, including composition and notation. He was also for a while the conductor of a university operatic group, and the York Philharmonic Male Voice Choir, and was principal horn with the York Guildhall Orchestra, where he also performed the Second Horn Concerto by Richard Strauss.

After moving to Australia with his young family, a stream of new works appeared, initially for brass, and especially for horn, and then for the other ensembles. Opportunities from community and educational groups increased his motivation, with workshops and performances from Oakleigh Brass, Maroondah Symphony Orchestra, Grainger Wind Symphony and Melbourne Youth Music’s MYO and MYSB, all of whose support is gratefully acknowledged.

In 2006 The Eleventh Day, a new slow march for brass band, won first prize at the Melbourne International Festival of Brass, and was a finalist for the quick march with Emerald Hill. That inspired David to return to study and in 2010 completed his Master of Music in composition at the University of Melbourne, working primarily with Julian Yu. In 2018, he graduated with a PhD in composition at the University of Melbourne, having studied with Stuart Greenbaum and Brenton Broadstock.

In one of the earliest ‘Live at the Convent’ programs on 3MBS-FM (Melbourne), The Midnight Prince – a ballet for eight horns – was premiered live to air. Subsequently the Four Haiku for tenor and piano were broadcast in the same series. Recently, David has had works played by the Melbourne Symphony Orchestra, the Defence Force School of Music Band, Grainger Wind Symphony, the Guildhall School of Music Horn Choir, and the Bourbaki Ensemble. A highlight has been an informal performance of the horn octet, this time with over 40 players, including the late Barry Tuckwell, Ben Jacks and Jeff Nelsen. The Undone Years, a saxophone concerto commissioned by Melbourne saxophonist Jason Xanthoudakis, received premieres in Melbourne and Sydney, and was performed a further two times in Melbourne. Noisy Nora, a children’s story for narrator and orchestra, premiered in 2012 by the Zelman Memorial Symphony Orchestra, and Against the Odds, a microsymphony, was recorded by the Melbourne Symphony Orchestra.

A continuing commitment to community music and a belief that new music has a strong place there has led to A Crimson Carousel for symphonic band (commissioned by the Boroondara Symphonic Band), and The Thousand Steps, commissioned by the Maroondah Symphony Orchestra for its 50th anniversary. Short Trips, an exploration of jazz changes in a non-jazz context, originally composed for trumpet and trombone, has had success in various adaptations, such as for flute and bassoon. Knights of Gallipoli for brass band was David’s contribution to the 2015 ANZAC centenary and is aimed at all grades of player.

David Keeffe is an English-born Australian composer, conductor, horn player and technologist. Growing up in a musical family, at 6 he met Benjamin Britten, and the idea of actually becoming a composer was planted. His music literally draws breath: writing for voice and for wind instruments has been a constant theme. David’s music is often inspired by textual narrative, whether for actual word-setting or for purely instrumental sounds.

Studies in London with John Tavener led to a move to the University of York for further studies in music, and then a change of direction led to a PhD in computer science. In 1997 he moved to Australia, where composing flowered again, and a stream of works appeared, first for horn, then for brass band, and then many other combinations of sound.

David has had works played by the Melbourne Symphony Orchestra, the Australian Army Band Melbourne, the Heidelberg Wind Ensemble, Brisbane Excelsior Band, Oakleigh Brass, the Grainger Wind Symphony, among others. In 2018 he completed a PhD in composition at the University of Melbourne with Stuart Greenbaum, and is published by Wirripang.